Once again, this ride proved to be popular with 20 bikes gathered at the Caltex Carseldine, before we headed off. You know, bikers never really grow up… we only learn how to act in public, so I knew it was going to be a good ride.

The usual hand shaking, back slapping and general piss taking was happening when I arrived. As it was the first ride for the year, everyone had lots to talk about. What I love about bikers is their ability to take the piss out of each other without anyone taking offence. Topics like race, gender, sex, age, sexual orientation, religion, disabilities and height are never off-limits. Just imagine if our behaviour was reflective of a modern-day workplace. Some of us would be on stress leave, some would have bullying complaints against them, someone would have a case to answer for something they allegedly did 20 years ago, and the ride would be on hold until we got our gender balance and diversity right. Luckily, we don't take ourselves too seriously, and life is a lot better for it! 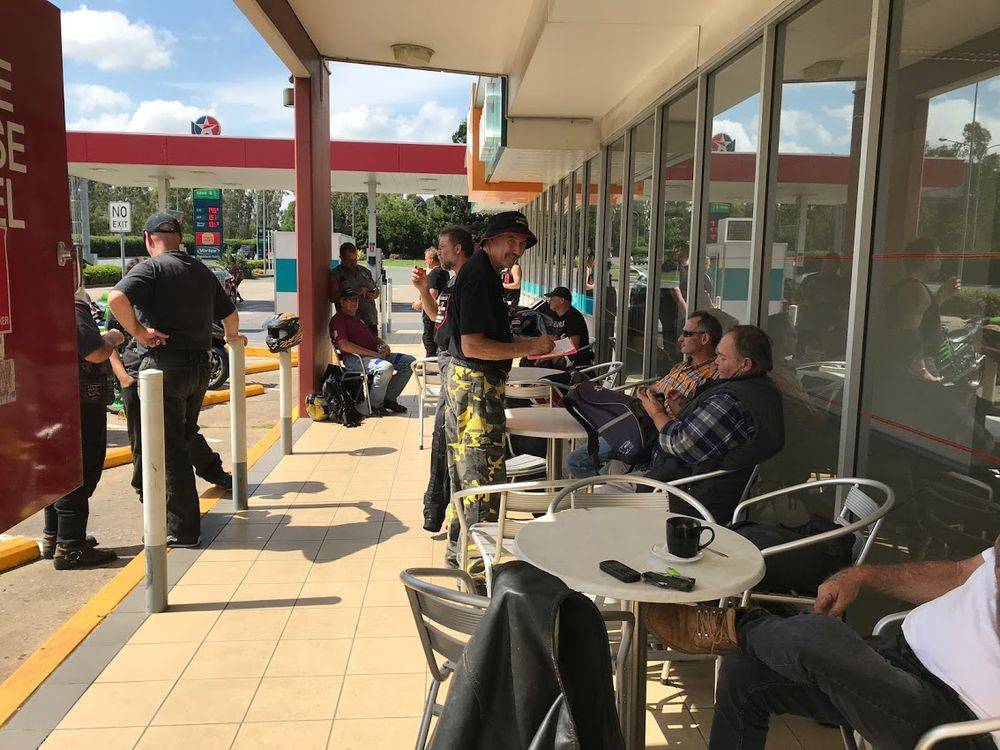 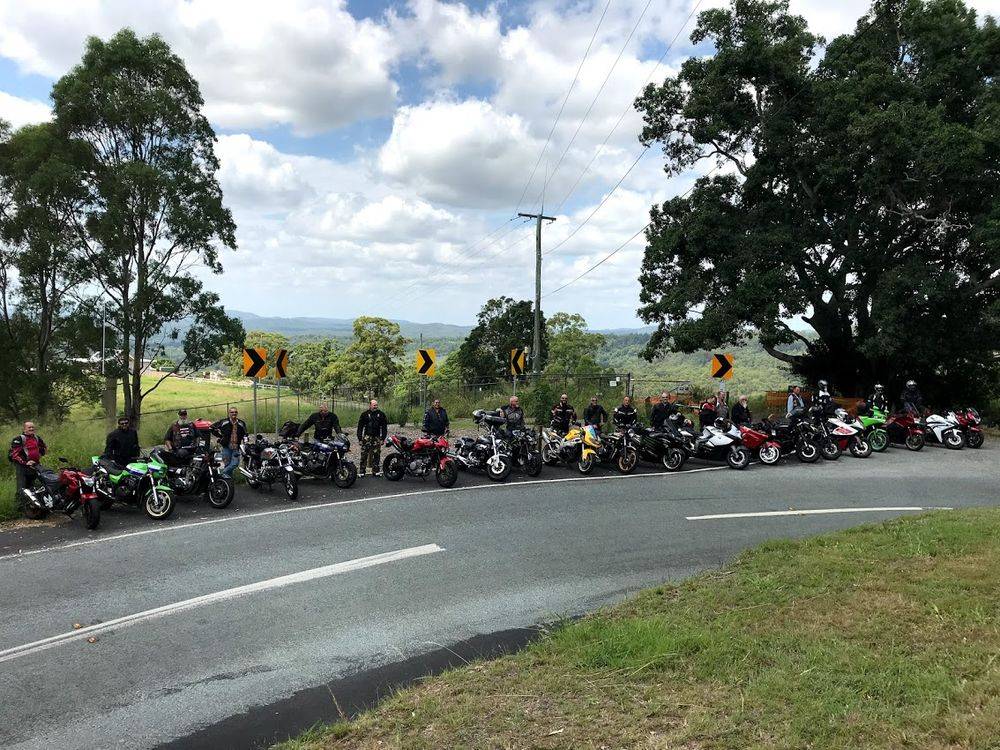 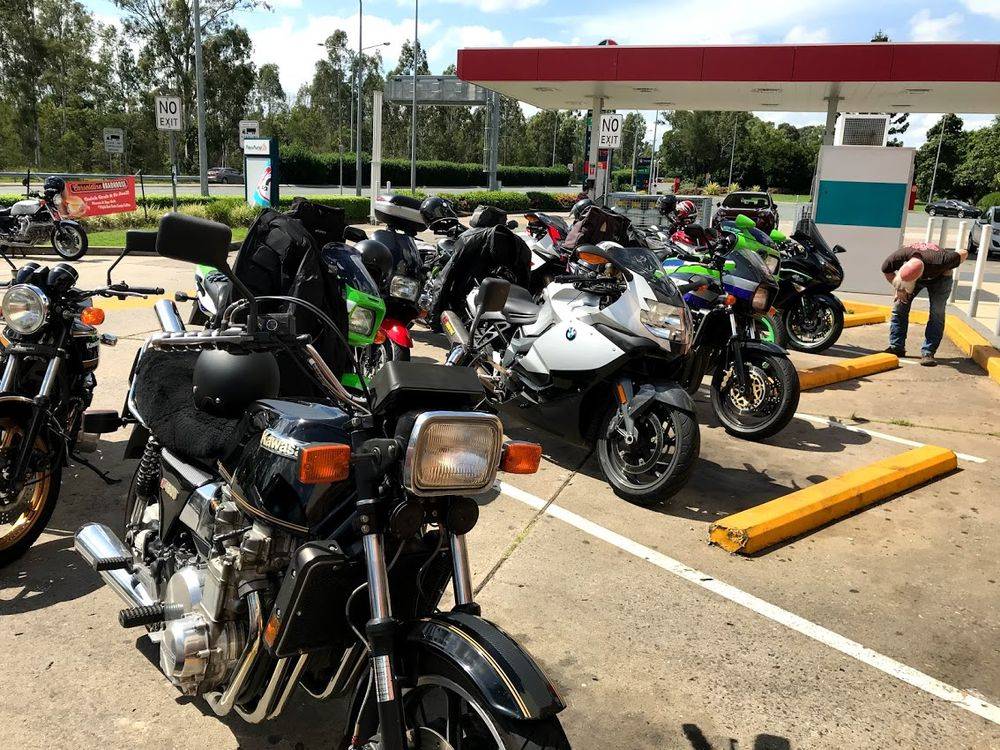 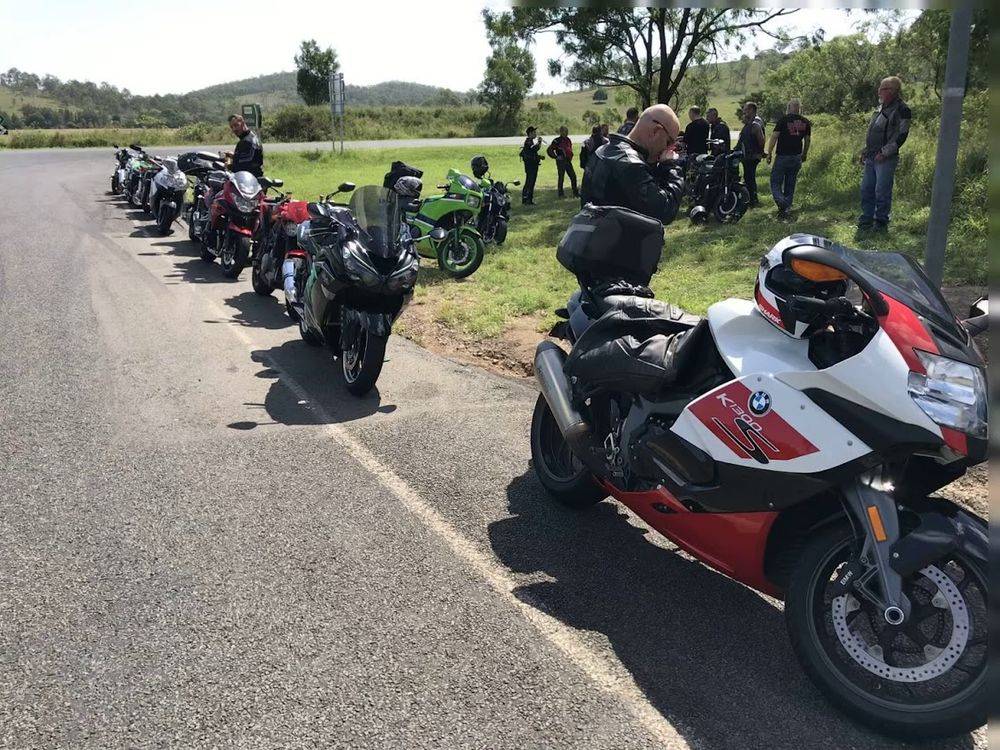 On every ride there is a fast, medium and slow group. This tends to sort itself out pretty quickly and everyone can enjoy themselves at their own pace. There is never any pressure to keep up, but one guy with a New Zealand accent and a long white beard (who will remain nameless) was riding a Lams bike like he stole it. Just goes to show that you don't need to be on a 1000+ sports bike to be quick.

On top of Clear Mountain, we lined the bikes up for a great pic, then it was off to the Dag Pub for a well-earned beer. Gary Hanley had texted me to let me know he had taken the wrong turn, but he arrived at the pub just as we were leaving for Kilcoy. I thought "Niiiice one GAAARY", as was often heard on the cricket fields over Summer.

What a great squirt it is from the Villeneuve turn off, past the jail, and around the back end of Somerset Dam. If God is watching us, the least we can do is be entertaining. By the smiles on the faces when we arrived at the top pub I think everyone enjoyed themselves. It was great to see Con and Steve Harriman turn up. Lunch was a bit slow coming out, because they had a new chef, but the food is always good and reasonably priced, so we will be back. Like flies to a cow pat, the three CON'S didn't take long to get together for a pose and pic. Apparently, the rest of us are not worthy!

Time to skedaddle; the 5 min warning was given! What a blast around Somerset Dam! Nigel was whinging that he couldn’t keep up; don’t know why, we always stick to the speed limit. In no time at all we arrived at "Bullshit Corner", which is appropriately named if the last comment is anything to go by. Time to say goodbye to the Southside riders who headed off through Fernvale, while the Northside riders headed over Glorious and a farewell drink at the Samford pub.

A final comment about the dumbing down of speed limits and the 60kmh posted over Glorious. FFS; they want us to be safe but force us to constantly look at our speedo; idiots!!! I have learnt the hard way not to argue with an idiot, he will only drag me down to his level and beat me with experience. I don't need the Politicians to monitor my behaviour on my bike as I aim to die peacefully in my sleep, like my grandfather... not screaming and yelling like the passengers in his car!!! Politicians and diapers have one thing in common, they should both be changed regularly, and for the same reason.

I'm looking forward to the pre-Conondale ride.... see you then!